I Am a Superstar Wiki
Register
Don't have an account?
Sign In
Advertisement
in: Matthew's Pages, LOL, Cartoons, Food

Let's All Go To The Lobby!

"Let's All Go to the Lobby" is a 1957 animated musical snipe played as an advertisement before the beginning of the main film. It featured a family of four talking concession stand products, singing "Let's all go to the lobby to get ourselves a treat" and walking to the concession stand. One shot from the film depicts the anthropomorphic gum, soda, popcorn, and candy walking behind the silhouettes of audience members in the foreground, creating an illusion of depth.  The trailer was animated by Dave Fleischer (producer of Popeye cartoons) and produced by Filmack Studios of Chicago, a company that specialized in snipes. It was part of a series of Technicolor trailers aimed at informing audiences about a theater's newly installed concession stand. While the use of animation in lieu of photography lends a degree of abstraction to the idea of concessions, in America's Film Legacy, Daniel Eagan argues that "with its simple, repetitive lyrics and streamlined animation, Let's All Go to the Lobby has a hypnotic pull that is as compelling today as it was fifty years ago."

The melody bears a striking similarity to "For He's a Jolly Good Fellow" but many songs are attributed to this melody. It is uncertain who may have originally composed the melody, but it appears to be well known first as a French folk song called "Marlbrough s'en va-t-en guerre" ("Marlborough has left for the war") in the 18th century about John Churchill, 1st Duke of Marlborough.

In 2000, "Let's All Go to the Lobby" was selected for preservation in the United States National Film Registry by the Library of Congress as being "culturally, historically, or aesthetically significant". Further color snipes, such as ones using a clock and featuring singing and dancing hot dogs, popcorn boxes, candy bars and other concession stand products took their cue from this trailer. Those targeted at drive-in theaters directed their patrons to the snack bar. Such shorts are still used for this purpose

Now for the unlame part!

The animation is pretty odd on said video. But it is freakin' old. And here are some snapshots I took of it! 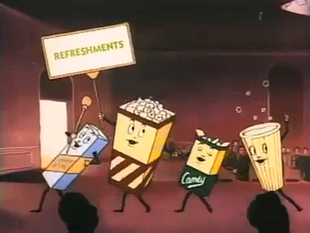 The candy bar OBVIOUSLY has a backache or something! I mean look at him! The popcorn is lopsided, his brains are going to fall out or something! The candy cigarettes face is odd if you stare at it long enough, and the soda looks like it's sad about something! 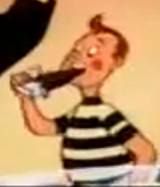 That "CANDY BAR" looks like steak in a wrapper from how hard he has to pull to eat it! 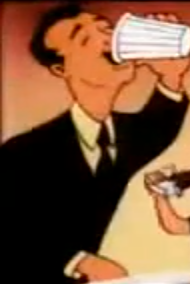 This guy is getting some SERIOUS pleasure from that drink. OH YEAH SIP THAT DRINK! 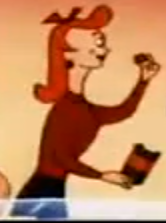 This lady is THOROUGHLY checking her candy before she eats it! Must have bugs in the box or something. 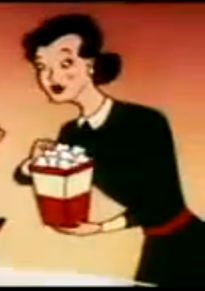 Umm... I don't know how to explain this one. Her expression is just CREEPY.

She seems to be PRETTY @$%# PROUD OF HER LOBBY! Just look at her face! BUY SOMETHING!! BUUUUY SOOMETHIIIIIIING!
Community content is available under CC-BY-SA unless otherwise noted.
Advertisement